On Day 5 of our cruise, which was November 11th, we sailed into Dunedin, New Zealand.  Sealing and whaling may have brought the first Europeans to the Otago Peninsula, but it was religion that brought about the town.  In 1848, a group of Presbyterian Scots founded the settlement and named it Dunedin . . . that is Scottish-Gaelic for Edinburgh.  Once gold was discovered, the whole province got rich overnight and Dunedin was at the very heart of it all.  The town was designed to resemble the capital of Scotland, with an architectural style that didn’t always match the landscape, but did reflect a whole lot of wealth.

One memorable note includes Baldwin Street, which slopes gently from the valley floor, then climbs steeply to the top.  Over the 161.2m length of the top portion, it climbs a vertical height of 4.22m, which is an average gradient of 1m in 3.41m.  The street is named after William Baldwin who carried out the original subdivision. 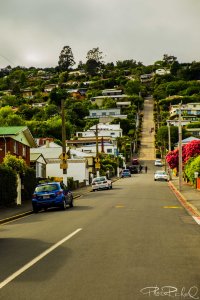 Another note is the Dunedin Remembrance Day Sunrise Service we saw during our tour of the city.

Tomorrow we will be in Akaroa / Christchurch City.